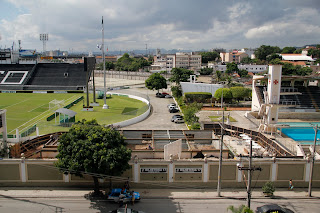 GeekPhysical is in Rio de Janeiro, Brazil! We're using the giant printer, re-designed, and multiplied (we now have 3!) to print the hand prints of 1923 fans of Vasco da Gama, the Brazilian football team. We're at the São Januário stadium, where the football team "Club de Regatas Vasco da Gama" was founded on August 21, 1898 as a rowing club first, and a football later, in 1915. The team has 20.5 million supporters!

We're working with fantastic people from Espalhe, the Guerilla Marketing Company from São Paulo (http://www.blogdeguerrilha.com.br/) to create this project. Fans submit their handprints online via a Facebook app (http://www.facebook.com/PenaltyBR) where they hold their hand up to the webcam and their handprint is converted to a vector file which our printer can read. 1923 fan's hands will be chosen to be printed on the wall, and for a very significant reason. 1923 was the year of the team that was subject to racism, and in 1924, the president of the Vasco da Gama football team said NO to racism, holding up his hand, and turning down a championship game after he was asked to remove all black and poor players from his team. This was a huge movement for Brazil as shortly afterwards, the racist barriers set by the other teams were dropped. Story below. Penalty, the company sponsoring Vasco da Gama and the creator of sportswear has put out the newest shirt, featuring the hand from 1923. (http://www.football-shirts.co.uk/fans/vasco-da-gama-third-shirt-2011_10390)

We've been working for two months to prepare for this project, and will be covering it in a series of blog posts, photos and videos as we complete the project. More after the story... 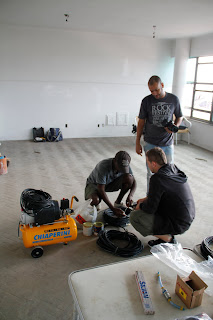 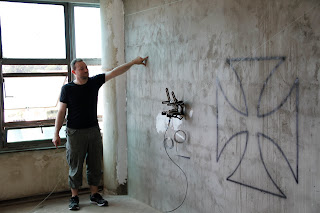 In the 1920's Vasco da Gama was asked to ban players from the league that didn't comply with their aristocratic standards, primarily those who were black or poor. The high brow teams of the time, namely Fluminense, Flamengo and Botafogo had all done so and Vasco da Gama was pressured to do the same. The other teams even went so far as to disguise black players (in whom they recognized extraordinary talent) with rice powder, to hide their skin colour. Of course, this was sweated off during the match and players received the name “Pó de Arroz” (rice powder). The team of the year 1923 was subject to this racism and in 1924, the president of Vasco, José Augusto Prestes sent an answer to the Metropolitan Athletic Association who was pressuring him to ban black and poor players, in the form of "The Historic Answer", stating that he would rather not play the championship than comply with their racist rules. This letter was accompanied with the open hand symbol, saying no to racism. In a few years, the racism rules died out, and all players were invited once again. (As told to us by Espalhe and read from various parts of the internet and http://en.wikipedia.org/wiki/CR_Vasco_da_Gama)

In answering the question, "how is this technologically innovative?" for a press release, we came with the following answer, which may give some insight into the printer:

1)The design of the printer:
The printer was designed considering that we would be travelling with it and that we might have to build more parts or repair parts so we only used cheap, readily available materials that could be easily purchased in any supply store, worldwide. We used plywood, wires, and spray paint guns that we knew we could find anywhere so we would save the trouble of having highly specialized, irreplaceable parts.

Also, the printer was designed using an iterative design process. Many prototypes were built, and with each new prototype, it was tested, problems were found, the prototype was re-built, re-printed on the CNC machine, re-assembled and re-tested. We went through many of these phases to find the best design that solved all the problems we encountered.

Software wise, each time the printer moves, there is a lot of math involved to predict where the printer needs to go next based on its ever-changing position. Furthermore, the software takes vector files and converts it to something the printer can understand. The reason we made this is a)there is nothing available to solve this problem, and b)this gives us more control over the printer and we can make our own special features such as timing or spraying and we can change it to be exactly what we need. This is also a prototype in development, and one we have worked hard to get good usability from.

2)The purpose of the printer:

The original idea was to use the printer to print very large areas like buildings, dams, or stadiums with a minimum hardware cost. We decided to use wires to limit the amount of hardware needed and it makes the printer lighter to transport. It's also more flexible to use since it is not an industrial component. In the old version, the motors needed to be in a specific spot and now the motors can be in a convenient location and the wires can run from suspension points and this should make the entire set up more flexible.

The idea behind the giant part of it is that we can write messages or images on walls using cheap paint, with an easy set up, and using readily available materials, moving directly from the design on the computer to the wall without having a print shore in between, and with a much lower cost since it can be any paint in the spray can.

More to come as we begin printing in Brazil! While you're waiting, check out some of the press coverage we've received (with Penalty and Espalhe), just hit "translate" if you're using Google Chrome, or use translate.google.com and translate the site.
http://www.ypsilon2.com/blog/publicidade/eu-abro-mao-penalty-vasco-e-a-luta-contra-o-racismo-que-teve-inicio-em-1924/
http://www.portaldapropaganda.com.br/portal/propaganda/24772-torcedores-sao-convocados-a-celebrar-marco-historico-do-futebol-brasileiro-na-fachada-do-estadio-de-sao-januario
http://ccsp.com.br/ultimas/noticia.php?id=52534
http://www.voxnews.com.br/dados_noticias.asp?CodNot=74702
http://www.institutotavola.com.br/author/admin/
http://marcabrasil.terra.com.br/vasco/html/2011/5/vasco_faz_campanha_para_lembrar_time_multirracial_de_1923_16279.html
Posted by GeekPhysical at 7:20 AM

Dude, congratulations for the work and innovation of this machine ... Since a huge fan of Vasco da Gama, I'm glad to know that they are participating in a project reminiscent of a passage that marked the history of our football. And best of all, the Giant Printer'll put my hand on the wall too. Hug and surely gained a lover of your work.

Hi Anselmo, I'm glad to hear you got your hand on the wall! :) We'd love to see a photo of it, please feel free to email it to us - geekphysical at gmail, it was so good to be involved in a meaningful project that was greater than 'just' marketing but rather, an important piece of history being re-visited.