For Easter, GeekPhysical wanted to celebrate by decorating eggs. We tried Martha Stewart's site (seriously) but it was a bit too far from our style. Hence, the Eggbot was born, and Geekster replaced Easter. Happy Geekster, from us to you.
Flickr YouTube

Eggbot is a CNC plotter for Easter Eggs on a small scale, built to fit your average egg and accommodate for the curvature of the egg's surface. We've drawn all sorts of wacky patterns and are having fun blowing out the eggs (we had to edit out egg blowing noises from the video, it was hideous) and decorating them with the Eggbot. 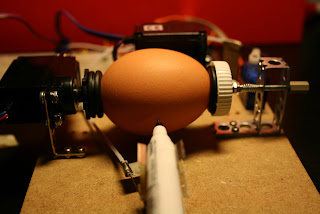 Three servos run Eggbot. It's technically an XY plotter but instead of moving the pen in an XY direction, we rotate the egg for X duration and move the pen in a radial motion o make the Y movement. Essentially it is a CNC machine, plotting and drawing based on XY coordinates. 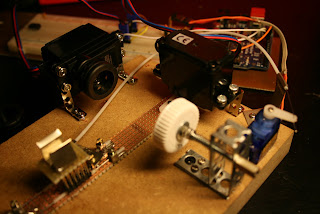 To build it, three servo motors were placed on a block of wood. One with a rubber washer to hold one end of the egg; the other end of the egg is held by a bottle cap embellished with a washer, held up by some brace band and screwed in with a screw. The second large servo controls the pen holder moving it in a radial motion, following the Y coordinates. The third servo is a tiny one which is attached to a wire, and further attached to the pen holder, acting as the up and down motion a plotter might have.

The software originally created for a giant plotting device which could print on to a wall of 5 X 5 meters. The software takes HPGL plotter files (ancient plotter language) and converts them into coordinates which in turn can be fed to any printing/plotting device. It's been adapted for Eggbot and is still under construction as we try to improve it along the way!

Have a great Geekster, we hope to post some more fun egg designs over the coming week. 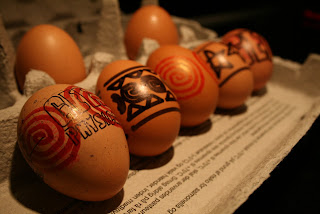 Note that you can buy a kit of the original EggBot at www.egg-bot.com

Is there any way to get the code of the controller? It will be very helpful for my final career proyect. Thank you so much!

Thanks for providing recent updates regarding the concern, I look forward to read more. CNC Machining